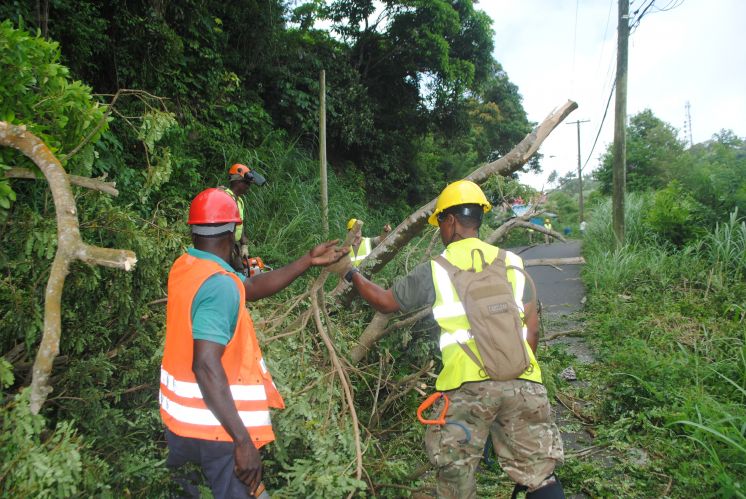 RBR troops from Logistics Company installed high intensity security lights at the free public clinic, which has been hit by burglars, cut down trees that hid it from the nearby road to remove cover used by would-be thieves and repainted the building inside and out.

More troops are scheduled to install secure fencing around the building before the RBR leaves the multi-national Exercise Tradewinds which is being held in the country, on Saturday.

Clinic staff nurse Zelell Rogers said: “The soldiers are doing an excellent job. It needed a lot of work done.”

She added: “We have had some problems with people breaking in and stealing computers and drugs.

“But they have cleared the surrounding area so it will make it harder for thieves.

Ms Rogers said: “We felt unsafe when there was only one person in the in the clinic – it’s much safer now.”

She added: “The Royal Bermuda Regiment soldiers have been very pleasant. We feel safe with them around.”

A total of eight soldiers worked on the building yesterday and about 30 more will be deployed for the fencing work.

Sergeant Major Rupert Lambert, who was in charge of the RBR team, said: “It’s our community project and we’re on our third day now.

“We’ve powerwashed the outside of the building, the walkways and walls in preparation for painting.

“And the security lighting we’ve installed will greatly improve their safety.”

Sgt Maj. Lambert added: “It’s a traditional thing for the RBR to do community work when we’re on overseas camp. It’s a public clinic and we’re very happy to help them out.”

RBR Private Yerodin Nesbitt, 34, from Sandys Parish, said: “It’s good that we can make a positive contribution to our host country.

Pte Nesbitt, a chef and part-time mechanic in civilian life, added: “The people in St Vincent have been very nice to us, so it’s good to pay them back a little for our stay here.”

Mr Browne said: “It’s a great act of generosity to have at our disposal 30 to 50 soldiers to improve the clinic, which is visited by thousands of people and serves several communities.”

The minister added: “Because we will have a more comfortable environment for patients and staff, the clinic will attract more people and there will be a better standard of care.

“When people have a more comfortable environment, it will encourage them to come here more often.”

Mr Browne added: “When people see we have individuals from outside our country here for Exercise Tradewinds and contributing in this kind of way, there will be great appreciation  for the Royal Bermuda Regiment in St Vincent & the Grenadines.”

Lt Col Curley said the clinic was chosen for the community work because it was close to the RBR’s main base at the disused ET Joshua Airport, so it was easier to transport soldiers and equipment to the site.

He added: “We are more than happy to help out and it also tests the versatility, teamwork and logistics ability of our soldiers, which improves their skills.”

RBR soldiers also pitched in to help the country’s Forestry Department cut back trees that overhung above-ground power cables on Lacroix Road in the Mesopotamia area of the country.

About 20 troops from 5 Platoon, the heavy equipment section of humanitarian aid and disaster relief B Company, deployed to help clear the road of debris after Forestry staff cut back trees.

A simulated downed power cable training scenario was incorporated into the work to test the troops’ training and RBR soldiers with a variety of simulated injuries acted as casualties to allow soldiers to hone their first aid skills.

Private Davonne Daniels, 33, a chainsaw operator with the platoon, said: “It’s a useful exercise for us and we’re also helping out our hosts.”

The platoon has also performed guard duty around their base, unloaded a Royal Canadian Navy ship carrying equipment for a Barbados Defence Force field hospital set up for Exercise Tradewinds and carried out reassurance patrols around St Vincent.

Pte Daniels said: “We are trained to turn our hands to anything, but helping clear roads of fallen trees and dealing with downed power lines is something we could expect to deal with at home.”

Cornelius Richards, a senior forestry supervisor, added: “It’s been a very smooth operation. The Regiment approached us and we welcomed the opportunity to take advantage of Exercise Tradewinds and the people who are here.”