Bermuda’s soldiers today (TUES) took part in a large-scale exercise designed to test their skills in protection of key points and casualty evacuation.

The troops tackled armed insurgents, protected a building designated as the seat of government and dealt with angry residents as well as with people seriously injured in a massive gas explosion.

They also got instruction in trauma treatment from a specialist from the Royal Army Medical Corps earlier in the day.

The soldiers were taught to use tourniquets to stop serious bleeding, how to deal with chest wounds and how to use field dressings on arm and leg injuries as Exercise Active Shield entered its second week.

They were also shown the newest stretchers used by the British Army, including a collapsible one designed to be carried in the field before they put their training into practice with casualties with realistic injuries and fake blood.

Corporal Dijon Arruda, 31, who commanded a section for the scenario, helped deal with the casualties, which included a double leg amputation, victims with serious burns and others with shock and minor injuries.

Cpl Arruda said: “Even though it’s training, getting in a situation and looking at it, there is a pause.

“We learned a lot and of new things and we will be able to adapt some of that training to back home.”

Cpl Arruda, from Warwick and who works in purchasing at the Hamilton Princess Hotel, added: “The equipment the British use is very modern and easy to use and travel with.”

An RAMC woman Lance Corporal, who cannot be named for security reasons, said after the day’s training that the RBR contingent had thrown themselves into the scenarios.

The 28-year-old added: “They’re actually quite good on the trauma side of things.

The leadership of the Junior Non Commissioned Officers in organising caring for and giving first aid to the victim with serious leg injuries was quite good as well.”

She said: “They played the game well – everyone who was involved has worked very hard.”

The medic added: “They’re dead keen – you could see they took a lot of pride in it and their discipline is pretty good as well.”

The RBR soldiers earlier practiced house searches for firearms and other contraband items in a purpose-built training village, setting up vehicle check points and searches of people and vehicles.

Pte Alex Godet, 24, from Paget, said: “It was all new to me – everything we’ve done this week has been.

“It’s been very exciting. We learned a lot on the house searches by missing things – we’ve had a lot to cover in a short period of time, which is the best part of the exercise.

“Here, we’re in the classroom then out in the field immediately afterwards and learning by doing things.”

Cpl Ahmed Hall, 28, from St David’s, who works for building supplies firm Baptiste, added: “The house clearing was the first time for many of the troops. But they learned fast and they will remember what they were taught.”

Sergeant Craig Davitt, a 15-year British Army veteran from the Royal Anglian Regiment’s Vikings battalion and an instructor for Active Shield, said: “There are a few ‘work on’ points.

“But from the start of the exercise, there has been a great improvement in their overall situational awareness and how they look at things tactically.

“The private soldiers have improved over a short period of time, which is great.”

Sgt Davitt added: “I have enjoyed working with the RBR and I would welcome the chance to work with them again, in the UK or in Bermuda.”

The RBR troops on Monday worked on night patrols in urban and open areas, designed to support the police by deterring crime, gathering intelligence and reassuring the civilian population. 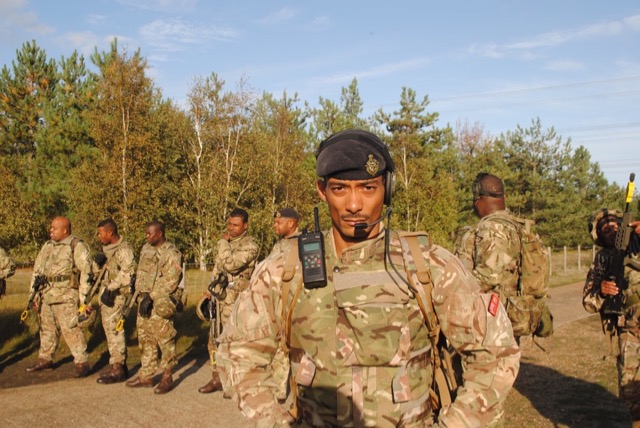 He said: “There are few areas in Bermuda we can do this kind of training without disrupting civilians.

“We have definitely capitalized on the training areas out here, which are much more realistic than we could provide at home. They are much more versatile.

“The soldiers have worked together for several days and they are understanding each other better, they’re listening to their leaders and really enjoying it.

“Despite getting cold and wet and wearing a lot of kit and equipment, they were determined to to keep working. I’m proud of all of them.” 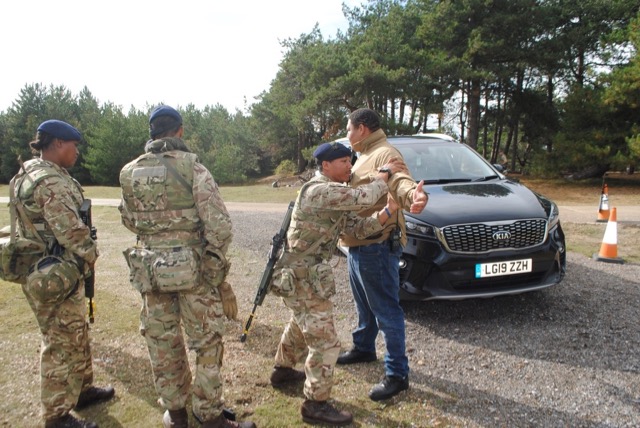