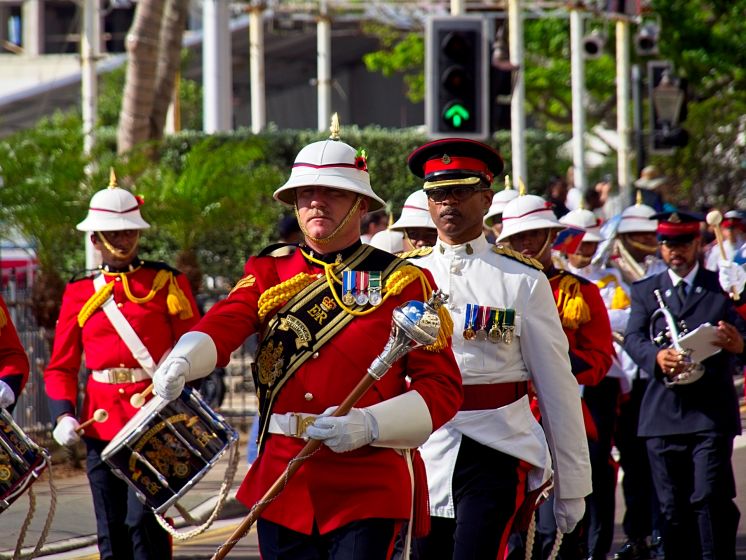 Hundreds of people came out to honour war veterans and the fallen today (MON) as the island marked Remembrance Day.

The crowds lined Front Street near the Cenotaph at Cabinet Office as the small band of surviving veterans marched on parade alongside soldiers from the Royal Bermuda Regiment, and its Band & Corps of Drums, the Junior Leaders, the Bermuda Police Service and the Sea Cadets.

Randolph Hayward, who will be 96 on Thursday, served with the 1st Battalion of the Caribbean Regiment as part of its Bermuda Contingent in Italy and in the deserts of North Africa in World War Two.

Mr. Hayward said he was now too frail to march, but watched the commemoration from a seat near the Cenotaph.

He added: “It was very good – but I can’t walk, I had to be seated. I remembered things.”

Mr Hayward said he was pleased to see so many younger people either on parade on in the crowd.

Bandsman Alexander Miller, at 16 one of the youngest soldiers at the ceremony, played the traditional Last Post on the lawn of Cabinet Office.

He said: “I did this last year as well, so that calmed my nerves.”

The Warwick Academy pupil added: “I can’t imagine what they went through in the war, so I respect them and honour them. It was a privilege to play.”

Private Asiyah Jones, 24, from Devonshire, was among the chefs who started their day at 7am to ensure the veterans lunch went without a hitch.

But Pte Jones, who helped serve the food, said: “I enjoyed it. I liked meeting the veterans.”

Among the crowds were visitors Evan Shukan, from Maryland, a member of the US Public Health Service, which provides medical personnel to the US Coast Guard, and Andrea Dolch, from Washington DC, who works for aid organisation the US Agency for International Development.

Mr Shukan said: “It seemed like an interesting thing to go to and it struck me how much this sort of thing, in a small country, is that bit more meaningful.

“It was interesting seeing the different branches of the services. And we can’t forget these things.”

Ms Dolch added: “I thought it was a great Remembrance ceremony.”

Governor John Rankin, who led the Cenotaph wreath-laying ceremony, said at a lunch for veterans and their families afterwards: “We were blessed with good weather for the Remembrance parade this year and it was wonderful to see so many veterans there to whom we were able to pay respects.

“I was also pleased to see so many people attending from across the island. Remembrance Day is an important opportunity to thank all those who served to protect the freedom we enjoy today. We will remember them.”

Premier David Burt, who also mingled with veterans and their families at the lunch, provided by RBR chefs, added: “It was a beautiful day and it was good to see everyone out.

“It was a wonderful ceremony that we are proud to continue.”

He added he was pleased that the uniformed services on parade had attracted praise for their performance.

Mr Burt said: “That’s absolutely as it should be. It’s important to continue these traditions.”

RBR Acting Commanding Officer Major Ben Beasley, who laid a wreath at the Cenotaph alongside the Governor, Premier David Burt and other dignitaries, said: “It’s always humbling to see members of the public come out and support such a solemn event.

“It’s the least we can do to honour those who gave so much for our freedom.”

Maj. Beasley added: “Our ceremonial duties are, while the most public, are only one of the roles the Royal Bermuda Regiment performs for the country. But it’s a very important role, especially on occasions like this.”

Colonel David Gibbons, who has just taken over from long-serving Colonel Eugene Raynor as Honorary Colonel of the RBR, said: “It was, again, a remarkably good attendance.”

He added: “The Regiment and the Band & Corps of Drums did a great job. The bugler, in particular, gave an excellent performance.”

Colonel Gibbons said: “We want to see some more former members of the Regiment joining in. As time goes on, we will have to fill those ranks of people who have served.”