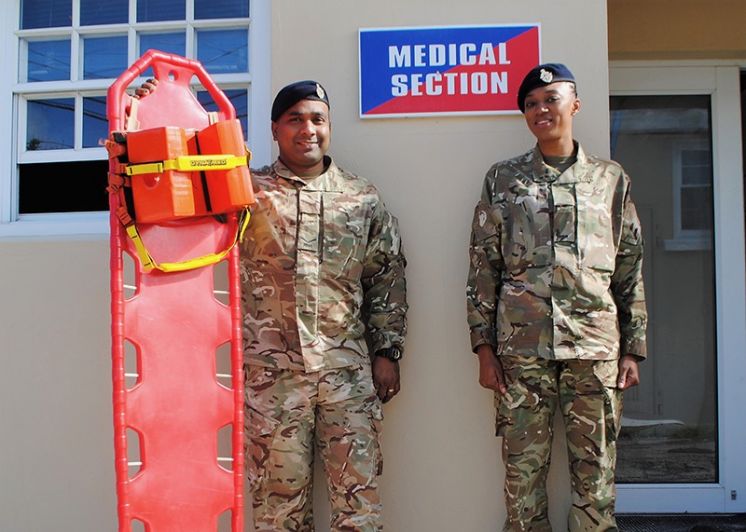 Medics from the Royal Bermuda Regiment are on standby to treat any injuries suffered by new soldiers at Recruit Camp.

But they are also using some of their time to teach at St. John Ambulance to gain more qualifications as instructors through the medical charity.

Lance Corporal Siva Senthanmaraikannan, 35, who qualified as an Emergency Medical Responder through a partnership between St John Ambulance and the Regiment, said: “We worked with St John Ambulance every Monday night this month – that’s part of my instructor’s course.”

The medic, a chef at the King Edward VII Memorial Hospital, said his ambition was to qualify as an Emergency Medical Technician, with training likely to be carried out overseas.

He added two RBR medics were on duty around the clock for Recruit Camp.

Lance Corporal Senthanmaraikannan said: “Our job is to make sure we cover the soldiers in camp and when they are out in the field. Inside camp, the medic room is always staffed in case there are any injuries.”

But he said the injury toll had been light.

He added: “We have had some minor injuries — someone hurt their knee and one recruit pulled a muscle during physical training, so we gave first aid and some treatment.”

The married father of one daughter said: “I’m enjoying it. I have more responsibility with my rank and I’m very happy in the Regiment. The hospital is very flexible about my military duty. They appreciate the importance of the Regiment and I’m very grateful to them.

“I can use these skills in my civilian life as well. I’ve already assisted at a couple of road accidents and was able to give first aid.

“It’s a very satisfying job being a medic. I’ve learnt a lot in the Regiment and I’m grateful for the opportunity.”

Private Nora King, 33, a qualified EMT and certified nursing assistant in her homeland of Jamaica, said that Recruit Camp had been “great”.

She added: “I enjoy the Regiment very much — it teaches me to be more disciplined.”

Major Duncan Simons, the RBR’s Adjutant, said the RBR had aligned its training over the past two years to the highest external standards, and would continue to seek out partnerships with organisations in Bermuda and overseas.

He added: “RBR medics have had the opportunity to train to EMR level and some have gone on to qualify as EMTs or even nurses. Many are first aid instructors, which benefits us and St John Ambulance.”

Major Simons said that the recruits will be St John Ambulance-qualified first aiders by the end of April after a 16-hour training course run by the charity’s instructors.

He added: “This is the second year recruits have been trained to this standard and, over the coming year or so, we hope to deliver the same training to all soldiers of the Regiment.”

Major Simons said: “It’s another of the many benefits of RBR service to civilian employers — any employer of a soldier will have a qualified first aider on their staff.”