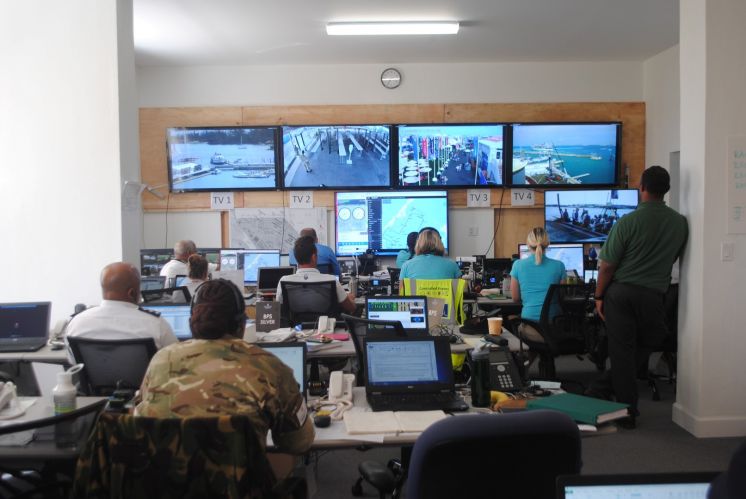 Soldiers from the Royal Bermuda Regiment are at the heart of a massive security operation designed to keep the America’s Cup event safe.  The Regiment has joined forces with event organisers and island emergency services in a joint effort to safeguard the competition.

“It’s been really seamless the way the Royal Bermuda Regiment has folded into the planning.”

Mr Walley added that the Regiment’s role in dealing with natural disasters like hurricanes was ideal preparation for coping with a major event like the America’s Cup.

He said: “That experience has been really invaluable in here.”

Chief Inspector Jerome Laws, Silver Commander for the Bermuda Police Service in the centre, located close to Dockyard, added: “It’s all about partnership working and the Commissioner of Police has sworn in 24 Operational Support Unit soldiers and 14 Boat Troop soldiers from the Royal Bermuda Regiment to join our officers for the main event and to assist the BPS with business continuity island wide and on our waters.

“Working with the Royal Bermuda Regiment has allowed us to expand our resources in both the marine unit and the public order unit. This allows us to cover a larger area on both land and water from a public order and marine perspective.

“The soldiers’ willingness and readiness to perform this role is at a very professional standard.”

Minister for National Security Jeff Baron said: “From the executives in JACC discussing high level strategy to the men and women who are managing access control to the Event Village, I’ve been impressed with not only the quality of service but the enthusiasm all ranks of the Royal Bermuda Regiment have shown.”

Senator Baron added that thousands of people a day were screened by the RBR on entry to the Cross Island venue.

He said: “I’ve heard very positive feedback on their performance and their ability to adapt to something that is quite new to them and to the demands of the various stakeholders.”

Captain Duncan Simons, the silver commander for the RBR in the centre, added: “We’re still early in the event and we’ve another four weeks to go, but we’re very happy with how things have progressed so far.

“We just have to keep up our high standards and keep doing what we’re doing.

“My emphasis has been that our soldiers conduct themselves professionally, provide good customer service and be the welcoming face of Bermuda.”

One executive close to the America’s Cup, with experience of major events like the London Olympics in 2012, said the RBR screening process was “the best I’ve seen at any event.”

He added: “One of the things about having the Royal Bermuda Regiment involved is that there’s a warmth in the way they greet each other and tourists. They have that innate pleasantness, friendliness and warmth and that’s an incredibly important part of the entire experience.”