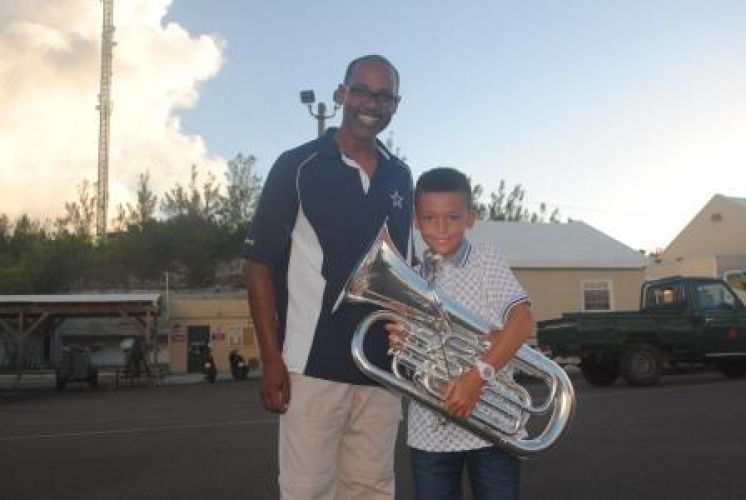 A young musician on vacation on the island paid a dream visit to the Royal Bermuda Regiment’s Warwick Camp to see the Band and Corps of Drums tune up for a performance at Harbour Nights tonight/tomorrow (WEDS). Little James Grassick, aged 9, who plays for the Peebles Burgh Silver Band in Peebles in the Scottish Borders, was invited to see the soldiers practice after a chance meeting in Hamilton with a serving soldier.

James, who was born in Bermuda while mother Lee worked here, said: “This is the best part of my holiday.”

And the youngster, who joined his local band aged just six and who last year was awarded a trophy for most improved young player, added: “The Regiment band is better than the Peebles one.”

Ms Grassick said: “He’s loving it – he’s fascinated looking at all the instruments – he likes the drums because he likes the Royal Marines band as well. But his favourite is the euphonium.”

Major Dwight Robinson, Director of Music for the RBR, said he was delighted to welcome a visitor – and encourage a love of music in young people.

He added: “They say the band is the forward face of the Regiment and we’re happy to play that role.

“It’s a very important part of Bermudian culture – we don’t take that lightly and we want to show the Regiment in a good light. That’s what we’re here for.”

Maj. Robinson said: “It’s good to play for our visitors and that’s one thing the band has been known for over the years – whether it is locally, in the hotels or overseas.”

The RBR Band and Corps of Drums will be the star attraction at Harbour Night on Wednesday and the troops are also preparing for a trip next month to perform at a major music festival and tattoo in Estes Park, Colorado.

Maj. Robinson added that the band included trained medics, chainsaw operators and instructors in other areas in the RBR.

He said: “We’re very versatile – it’s hurricanes one week and music the next. It highlights the adaptability and capabilities of our soldiers, who are a valuable resource for Bermuda, whatever the occasion.”

Maj. Robinson added the current line-up of the band also included five school pupils and college students, taken on as part of its summer employment programme.

He said: “It gives school age and college students the opportunity to play along with us and the chance to be exposed to what we do. It also gives us extra musicians to make up our numbers.”

And Maj. Robinson said: “We were delighted to have James here – whether people are locals or visitors, music is one thing everybody likes.

“And, as far as interesting younger kids, there is no such thing as too early in terms of exposure to different types and genres of music.”

A Regiment career offers recruits opportunities to travel, acquire skills useful in civilian life, test themselves to their limits and competitive rates of pay, as well as a $500 bounty for new volunteers. For more information, call 238-1045 or visit www.bermudaregiment.bm .