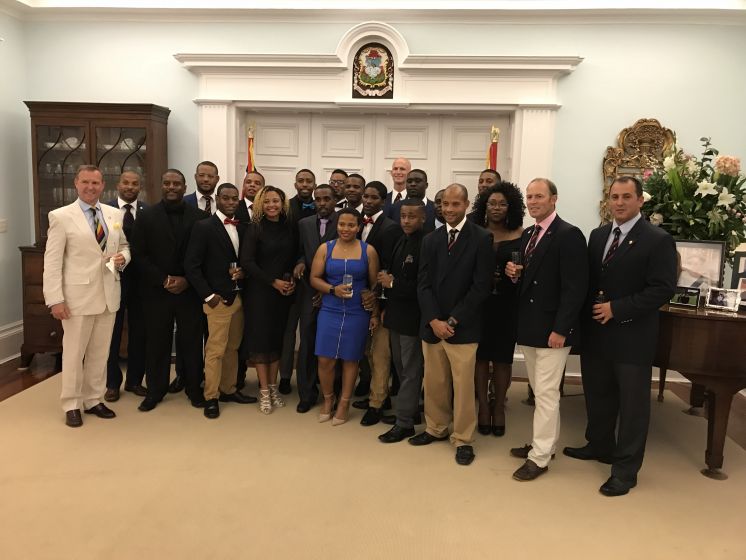 Mr Rankin said: “I’m both immensely grateful and enormously proud at the role the RBR and the Bermuda Police Service played in the hurricane response.”

Mr Rankin was speaking at a special reception at Government House for the 30 troops deployed to help in Turks & Caicos (TCI) and the six police officers sent to the British Virgin Islands (BVI).

He said: “Both islands suffered severe devastation from Hurricane Irma and the Regiment and police played a key role in the recovery effort.”

Mr Rankin added: “The Governors of both Turks & Caicos and the British Virgin Islands have expressed their gratitude for all the support provided in what were difficult and demanding conditions.”

Private Raguel Dill, 19, from Warwick and who works in corporate sales for phone firm Digicel who joined the RBR just nine months before he went to TCI on the two-week relief mission.

Pte Dill said: “The conditions were pretty bad – but we made it.

“We definitely made a difference down there just looking at the way the environment had changed since the day we arrived.”

Lance Corporal Lee Ann Medeiros, 25, a pastry chef from Warwick, added: “It was a great experience – but there was good and bad. The mosquitoes were a definite bad, but I got to meet a lot of nice people.

“A lot of them said how upset they were to see us leave. It was nice to know we made such a positive impact.”

But she said: “It was nice to come home – the first thing I did was have a hot shower and a nice homemade meal.”

Minister of National Security Wayne Caines added: “The restoration effort was about hope – when you land in a country that has been ravaged and these are people coming to help, there is hope and the knowledge that someone cares.

“The fundamental belief we have in Bermuda as a country is we care about each other and about other people.”

Mr Caines said that some of the RBR troops were just 18 and were in high school a year before – a tribute to the training at Warwick Camp and the commitment of soldiers.

Mr Caines added that people sometimes concentrated more on what was wrong with young people than what was right.

But he said: “These men and women represent everything that is right. When the story is told 20 years from now, they will be hailed as heroes.”

RBR Commanding Officer Lieutenant Colonel David Curley added: “Our soldiers lived and worked in some very arduous conditions, but they succeeded in the main mission of humanitarian relief.

“I’m proud of them and they set a very good standard working with UK armed forces and through their self-reliance.

“They all told me they would go back there tomorrow if they were deployed – and I’m confident they would again represent Bermuda and the Regiment to their utmost.”