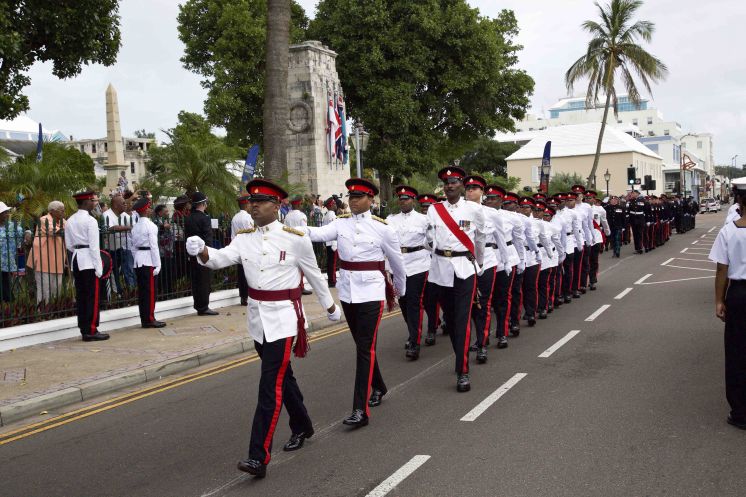 Crowds yesterday paid tribute to those who served at Bermuda’s annual Remembrance Day parade. The Royal Bermuda Regiment and its Band and Corps of Drums joined veterans, soldiers from the British Army and other uniformed services for the wreath-laying at the Cenotaph on Front Street.

Bernice Smith, 92, said she attended the ceremony to honour her late husband Norman, a World War Two veteran of the Bermuda Militia Artillery, who died in 1976.

Ms Smith said: “It’s important that people come out and remember – I come every year.”

Her daughter Lana Jordan added: “It’s good for young and for young people to serve in the Regiment.

Ms Jordan, whose husband and two daughters served in the US Air Force, while a son was in the US Army, added:  “It gives them a sense of pride, they meet people they wouldn’t normally meet and there’s a camaraderie they will never forget.

Veteran Donald Joliffe saw active service in the Korean War and the Suez crisis in the 1950s while serving in the British Army.

Mr Joliffe, 87, said: “Remembrance Day is very important to me and it’s a part of my own life.

The former soldier said he had been in Johns Hopkins Hospital in Baltimore for treatment – but told doctors he had to be home for Remembrance Day.

Mr Joliffe, a retired engineer, added: “I said I had to be back for the parade. I’m very proud to be here and proud I served my country.”

Governor John Rankin, who led the wreath-laying ceremony and inspected the veterans on parade, said Remembrance Day was important “both personally for me and as Governor” because his father had seen active service in World War Two with the Royal Air Force.

Mr Rankin added: “Veterans have given service to our country that allows us to enjoy the freedoms we have today. It’s important to remember all those who have served Bermuda in the forces

“It’s also the case that sometimes we have a lot to learn from those men and women who have seen so much in their lives. I enjoy listening to their wisdom.”

Premier David Burt, who also laid a wreath, said: “Tradition is important and I think we should always celebrate those who made sacrifices. And it’s always good to speak to people who played a part in history.”

RBR Commanding Officer Lieutenant David Curley said it was a privilege to honour “the sacrifices of our nation’s heroes.”

He added: “The RBR provided support for the full ceremony and parade and I’m proud of all our soldiers who gave 110 per cent to make Remembrance Day a mission success.”

Major Cameron Hastie, an officer in the Royal Regiment of Scotland but posted to the infantry training school at Warminster in England, is in Bermuda with the British Army rugby team for the World Rugby Classic, said he was struck by “the warmth and appreciation” of the crowds at the service.

Maj. Hastie added: “We read quite a bit of history about the Royal Bermuda Regiment before we came here. We know how proud they are of their history.

“What did surprise us is the amount of people who came out and attended the parade. It was lovely to see.”

Colonel Sandy Fitzpatrick, of the British Army’s General Staff,  said: “The Regiment was great. Being a reserve regiment and the only military unit on the island, it has the respect the reserve regiments in the UK have.”

A Regiment career offers recruits opportunities to travel, acquire skills useful in civilian life, test themselves to their limits and competitive rates of pay, as well as a $500 bounty for new volunteers. For more information, call 238-1045 or visit www.bermudaregiment.bm.