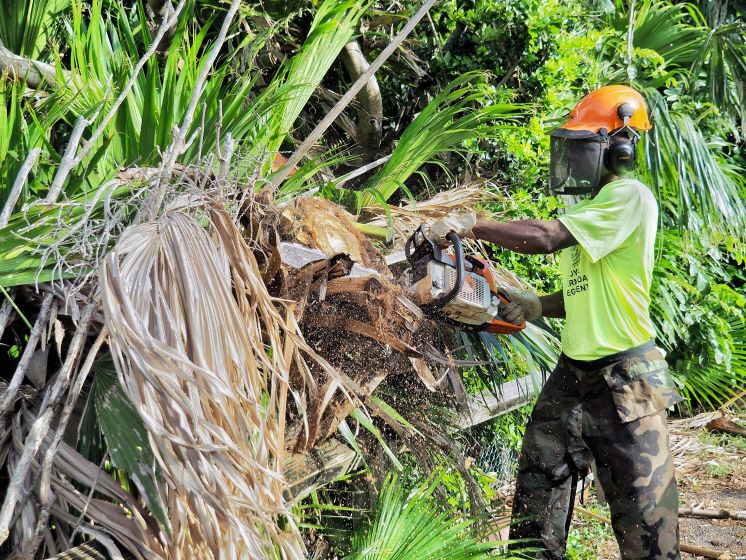 Soldiers from the RBR mobilised for the second time in a week after a double whammy from Hurricanes Paulette and Teddy.

More than 75 troops were embodied for Teddy – but senior officers said the storm had caused little damage.

Captain Kenji Bean, the officer in charge of the hurricane response teams, said five Immediate Response Teams were on duty, with one based across the Causeway in the East End.

Capt. Bean added Royal Bermuda Regiment teams carried out reconnaissance patrols  on Monday morning before the IRT teams went out in the afternoon on clean-up operations.

He said: “Our job was to clear the bus routes and deal with any trouble. There wasn’t much – just some debris and branches on the roads, that sort of thing. There were also one or two trees they had to cut back.”

Capt Bean added: “We have been very lucky – we weren’t called on to do any major work this time.

“But if we had been required to deal with much worse damage, we were ready and willing to pitch in and get the job done.”

“It’s always a good thing if we don’t have to deal with anything major and we did carry out route checks at the request of the Public Transportation Board to make sure the roads were in good shape.”

Col Beasley added the embodied troops had “serviced their equipment, restocked their trailers” and hit the roads yesterday (TUES) at 5am in case high winds overnight caused more damage.

He said the RBR Coast Guard had carried out checks around the coast by road to assess storm surge damage to houses close to the water.

Col Beasley added: “It’s been a learning experience – there is always the risk of flooding and one of our routine roles is to lay sandbags if needed.”

He said that two RBR soldiers, Officer Cadets Sheldon Fox and Leeann Tucker, whose flights were delayed because of Teddy, would head out on Thursday to the Royal Military Academy, Sandhurst, in the UK to start a tough eight week commissioning course.

Col Beasley added: “It’s part of our commitment to help our soldiers become the best versions of themselves and offer meaningful routes to personal and professional advancement – which is useful in both the military and their civilian lives.”

He added: “We are always seeking fresh new talent and offer an exciting life in the military for those who choose to serve their country.”