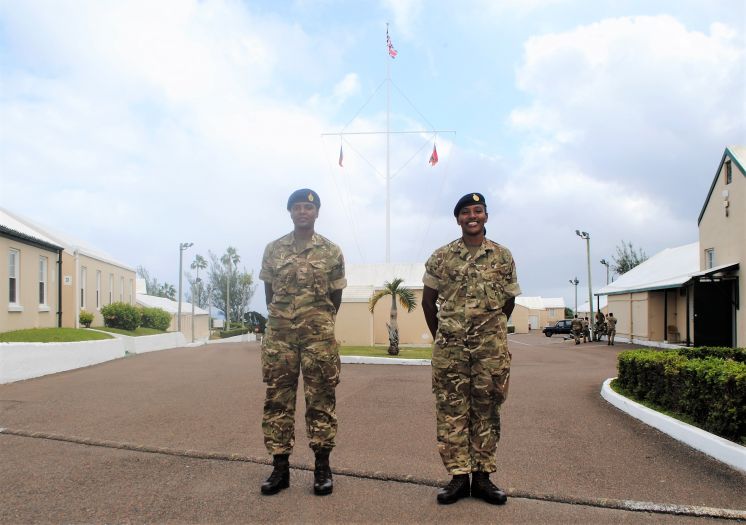 The country’s newest soldiers today/yesterday (FRI) completed the first step of their military careers as they finished two weeks of tough basic training.

But the occasion was not marked by the normal parade in front of family and friends, as well as dignitaries, because of strict Covid-19 regulations in force for Recruit Camp.

The 30-plus soldiers instead were addressed by RBR Commanding Officer Lieutenant-Colonel Ben Beasley before they got to wear their rank slides for the first time.

Private Timothy Rogers, 19, a plumber in civilian life, said he joined the RBR on the recommendation of a serving soldier – and did not regret the move.

He added: “I thought it would be a great experience – and I gained some pounds with the Covid eating, so I wanted the exercise and the discipline.

“It’s been everything I hoped for. It’s very demanding on the body, but worthwhile.”

He said he had enjoyed shooting the most – but admitted he at first found it hard to cope with army-style 5am starts.

Pte Rogers added: “I’m not a morning person, so physical training at 6am was a bit of a struggle. But I definitely adapted and got used to it.”

He said he had seen a change in himself over the two weeks and developed more self-confidence as part of the Regiment family.

Pte Rogers, from Devonshire, added: “When I first came in, I was very shy and didn’t know how to express myself. But being around good people, I was comfortable in my skin. I’ve gained a lot of confidence.”

For sisters Rysheka and Precious Hayward-Evans, from St George’s, signing up was a real family affair, although they were assigned to separate sections.

Pte Rysheka, 24, said: “The idea came from both of us. At first, it was a bit of a joke, then someone said they paid you and we thought ‘what else can we get out of it?’.”

She added: “I would say it’s better than I expected. It was very intense, but I thought it would be more overwhelming than it was. I’ve got a few bumps, bruises and scratches, but we all pulled through.”

The psychology student at Huddersfield University in Britain, who is doing her course online in the meantime because of the pandemic, said: “My self-discipline has improved.

“I’ve also got more patience and I made a lot of friends and connections – it feels like I’m part of a new family. It’s very comforting to know the whole platoon is standing behind you.”

Pte Precious, 22, a physiotherapy student in Leeds, Britain, admitted there was a degree of sibling rivalry.

She said: “Being in different sections definitely upped the tension because I’m very competitive, but we all showed teamwork because that’s what we’re all about.”

The Recruit Camps also included trainee soldiers from overseas, with Ghana, Senegal and Jamaica among the countries represented.

Pte Abdul Tamba, 36, originally from French-speaking Senegal and married to a Bermudian, said he joined up “to have more experience of Bermudian life and to help the community.”

Pte Tamba, the manager of Champ’s convenience store in Somerset, who has a Master’s degree in economics, said: “I loved being on the shooting range and I loved the drill lessons.”

All the recruits praised the RBR chefs and the quality of the food on offer – despite Covid-19 restrictions that meant no self service salad and fruit bars and all the courses being served up by the catering staff.

Pte Tamba said: “The food was very good. That makes a big difference.”

Lieutenant Samuel Hewitt, the Recruit Camp platoon leader, spent his 28th birthday out in the field with the troops on the overnight exercise at Hog’s Bay Park earlier this week.

Lt Hewitt, a client relations manager with insurance firm BF&M in civilian life, said: “It was an excellent camp. There are always challenges for the staff, as well as the recruits.

“The most trying, but most rewarding, part of the training was the overnight exercise and it went well. They’ve also reached the standard of drill required for the two weeks.

“The recruits have gained mental and physical robustness from the personal fitness assessment and the operational fitness tests.

“They’re better, fitter, stronger. I’ve seen some tears and a lot of laughter. They all seem to have gained what they wanted out of the two weeks and they’re looking forward to their continuation training over the next six months.”

Col. Beasley told the assembled troops: “The development that has gone on in 13 days has been astounding.

“For some of you, it will have been the hardest two weeks of your life and that says something about your quality and character.”

Col. Beasley added that members of the public “would only see a member of the Regiment now – you reflect the history and traditions of the RBR” and that the highest standards of conduct were expected.

He said: “It’s a big contract you have just entered into and the job of the other people in this room is to make sure you have a good career and a successful one.”

Col. Beasley added that the soldiers would remember Recruit Camp and tell stories about it – but that it was just the first of many memories to come over their careers.

He told the troops: “Welcome to the family. Don’t ever let the Regiment down and it will never let you down.”