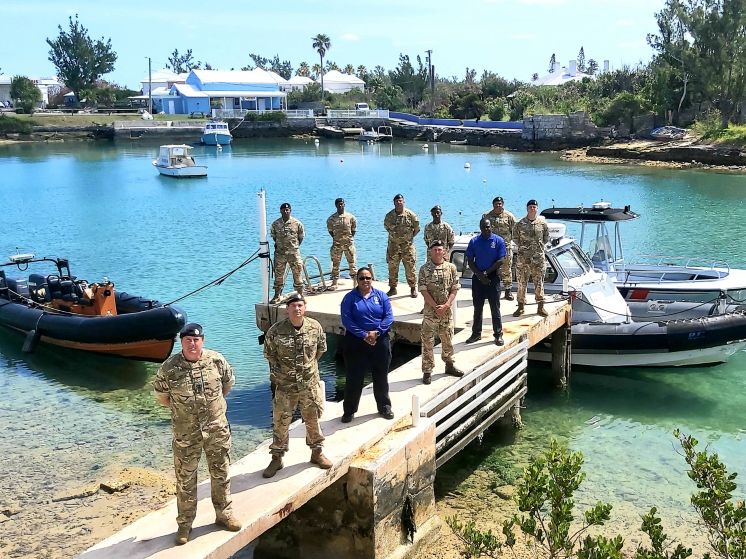 The Royal Bermuda Regiment has celebrated the first anniversary of the Coast Guard with the assumption of operational control over the service.

The news meant newly-promoted Captain Jeffrey Patterson has taken command of the unit, set up last February as a joint RBR and Bermuda Police Service operation for a transitional period.

Capt. Patterson said: “Seconded personnel from the police with maritime experience continue to serve within the unit - their expertise in application of the law will be invaluable as the Coast Guard develops and I look forward to continuing our excellent working relationship with them.”

He added: “The general public won’t notice a difference from what has been delivered over the past 11 months – for ourselves, prior to this, we had to have a police officer in each boat to arrest people who had broken the law.

“Now we can exercise our operational duties without the presence of a police officer.”

Capt. Patterson was speaking after the Coast Guard marked its first year of service on the waters around Bermuda last weekend.

He said: “We are also the first full-time operational unit in the Regiment – it adds a big element to the RBR’s toolkit and underlines its versatility.

“The Regiment has always been there in a crisis, but this brings us to a different level and gives us a permanent presence – and that makes Bermuda safer.

“It underscores the value of the RBR and its commitment to the safety of Bermuda, on the water as well as on land.”

RBR Commanding Officer Lieutenant Colonel Ben Beasley added that a Coast Guard service had been discussed since the Gilbert Report into the then-Bermuda Regiment in the 1970s recommended a stronger maritime presence.

He said: “One of the visions then was that the Regiment should develop its capabilities to form a Coast Guard and it’s a natural evolution for an island country.

“We are developing a far greater maritime focus, which is vital for the safety and security of the people who uses the seas around Bermuda.”

Col Beasley added that the new unit, which offers part-time as well as full-time positions, added to the attraction of service in an RBR uniform and provided good value for money.

He said: “Using soldiers to undertake these duties combines people who are passionate about their role in a manner which shows prudent use of the public purse.

“This is their focus and they have years of experience from working in the former Boat Troop and with police officers from the Marine Section.

“Additionally, as their duties require them to manage and service the vessels and engines, the operating costs are kept to a minimum.”

The RBR Coast Guard will manage maritime traffic, work in environmental protection and guard against the waterways being used for illegal activities or in breach of marine conventions.

It will also work with and in support other Government agencies, like Customs, the police and the Department of Environment & Natural Resources.

Col Beasley told the public: “You will continue to see police officers on the vessels for some time and that shows our continuing collaboration.

“I am a former Reserve police officer who thoroughly enjoyed working in the Marine Section and I’m keen to ensure it continues to a role where our colleagues are warmly received while serving their country.”

He added: “The aim of the Coast Guard is to ensure they provide a safe and secure environment for recreational boaters, those who depend on the blue economy for their livelihoods, like fishermen and tour boat operators.”

Governor Rena Lalgie, Commander-in-Chief of the RBR, said: “Last week marked the official start of a wonderful new chapter in the history of the Royal Bermuda Regiment’s mission to protect Bermuda’s interests.”

She added the enactment of the Defence (Coast Guard Unit) Amendment Act 2018 was the “completion of a long-standing strategic objective to launch a Coast Guard unit in Bermuda and Bermuda Coast Guard officers to operate under standalone legislation.”

Ms Lalgie said: “I have confidence that the men and women that serve in the Royal Bermuda Regiment will rise to the challenges ahead and deliver further improvements in Bermuda’s maritime security.”

Minister of National Security Renee Ming added: “The Royal Bermuda Regiment Coast Guard has engaged in the vital role of protecting and safeguarding those on our waters.

“During the pandemic, the Coast Guard unit has served an invaluable role in ensuring boaters’ compliance with the Covid-19 regulations.

“And during these current times of adversity they continue to display an unparalleled resilience and determination.”

Ms Ming said: “All of Bermuda should be proud of the men and women who serve in all areas of the Royal Bermuda Regiment.”

“We continue to encourage those in the community who are looking for a dynamic and exciting career choice to consider joining the RBR, which offers a wide range of options, now inclusive of Bermuda’s fully operational Coast Guard.”