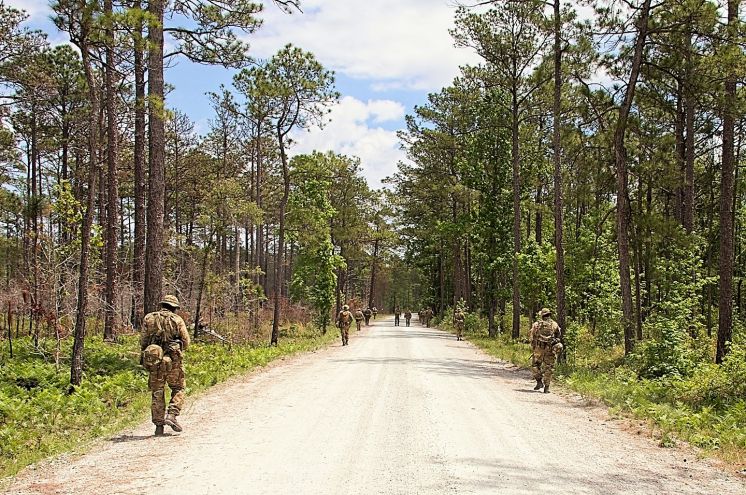 Soldiers who aspire to command roles are being put through the mill in a tough two-week test of their skills at a US Marine base.

About 30 soldiers and instructors on the Junior Non-commissioned Officers’ have passed the halfway mark of the grueling course at Camp Lejeune in North Carolina.

Private Taylor Eve, 30, who works in corporate services at the Bermuda Post Office, said: “It will give me supervisory experience because I’m trying to advance in my civilian life as well as in my military career.

“I want to move forward and enhance my skills.”

Pte Eve admitted she was forced to fight through in the first phase of the training, but a good performance in rappelling and on the shooting range had boosted her morale.

She said: “It’s definitely been tough – there have been good days and bad days. But I’m just going to push through and give it my best.”

The training, which prepares soldiers for promotion to Lance Corporal, has included fieldcraft, infantry tactics, map reading, urban operations and command skills, with a major assessment designed to test their knowledge this week before they return home at the weekend.

Pte Eve, a pay clerk attached to the RBR’s Regimental Headquarters, said she hoped promotion would help her advance in her role and that she had enjoyed the course.

She added: “I struggled in some areas, but I’m keeping pushing on.”

She added: “I’m treated exactly the same as everyone else. My needs are met by my superiors in my section – I have no complaints about that and I don’t feel any different from any other soldier.

“If I need support in any way, I’m confident I will get it. If you’re a woman and looking for something different, go for it.”

Pte Alex Godet, a 25-year-old IT technician from Paget who has served for two years, said he had enjoyed his stint in A Company, the RBR’s infantry role specialists.

He added: “I want to progress my career and it’s time to move up a level. The leaders above me are moving up, so it’s the natural order of things.”

Pte Godet said: “It’s been tough going – it’s been very hot, but morale has been good, but everyone’s been struggling with the heat.

“The training has been demanding as well, but it’s been very rewarding as well.”

He added: People have been put under stress, but that’s only natural and I think there will be a strong feeling of achievement at the end of it.”

Pte Godet said: “I’d like to stay in A Company and work with the new recruits there to pass on the knowledge I’ve gained at Camp Lejeune.

“Being a section leader in A Company would be very cool and I’m looking forward to it.”