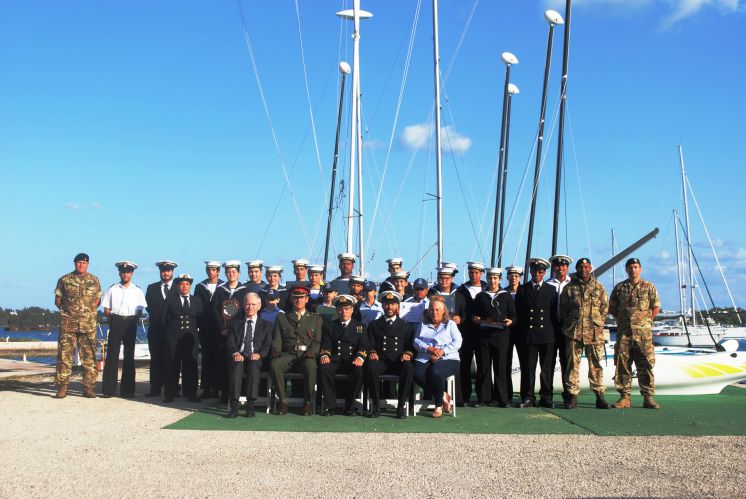 The island’s defence force helped the Bermuda Sea Cadets celebrate their achievements at the weekend.

Lieutenant Colonel Ben Beasley, the Royal Bermuda Regiment’s Commanding Officer, was the guest of honour at the youth organisation’s TS Admiral Somers for its promotions and awards ceremony.

The event, led by Lieutenant Commander (SCC) Michael Frith, the Commanding Officer of the Sea Cadets at the St George shore establishment, was also attended by Captain Jeffrey Patterson of the RBR Coast Guard and some of his team.

Col Beasley, who handed out promotions and the prizes, said: “It was a privilege to be invited.”

He added: “The future of the Royal Bermuda Regiment Coast Guard is reliant on people who have maritime skills and the Sea Cadets is one of the premier organisations for producing these people we will need in the future.”

He was speaking at the 49th ceremony of its type at the unit – the first since the Covid-19 pandemic hit the island more than two years ago – on Saturday.

Cdr Frith said the Sea Cadets shared values with the RBR, such as a commitment to community service.

He added: “But more importantly, the ethos of the uniformed services is the same. It’s making good citizens and where we can support each other that’s a good thing, a positive thing.”

Cdr Frith said: “The unit is strong and I can’t emphasise enough that’s because of the commitment and enthusiasm that everyone here shows.”

He added: “If you took a poll among Regiment personnel, you would find a few ex-Sea Cadets in there.”

Cdr Frith added former Sea Cadets had also gone on to work in the Department of Marine & Ports Services, as well as in seagoing branches of the UK and US armed forces.

Cdr Frith said: “Our goal is not to be a pre-service organisation, but that can be an outcome.”

Col Beasley added: “If they join senior units as adults, that’s fabulous, but I’m sure they will make good citizens later in life in any case and their parents should be very proud of all they have achieved.”

The Bermuda High School pupil, from St David’s, admitted afterwards she was surprised she had won the accolade.

OC Sampson-Pitt added: “I enjoy being out on the water, but it’s also about the people – I’ve made a lot of friends here.”

She said: “I have thought about the Coast Guard for when I’m older, but I’ll wait and see what happens.”

The event saw more than 20 promotions and awards handed out to Sea Cadets and Junior Cadets.

Col Beasley told the audience at the event earlier that there were “some of Bermuda’s future leaders” among the Cadets.

He added: “I firmly and absolutely believe that anything that gives structure and organisation to a young person makes them a better citizen.”

Col Beasley told the youngsters: “You have chosen to work with a team that puts other people’s needs before yourself – if everybody did that, the world would be a different place.”