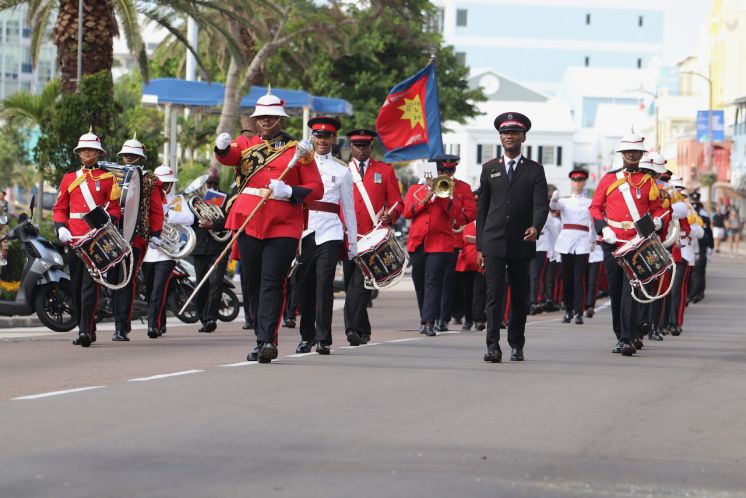 Soldiers from the Royal Bermuda Regiment took their places on Front Street today to march in the Remembrance Day parade.

Crowds looked on as the Band & Corps of Drums and Junior Leaders, joined by veterans and representatives from other island organisations, made their way towards the Cenotaph.

Dignitaries including Rena Lalgie, the Governor and RBR Commander-in-Chief, and David Burt, the Premier, laid wreaths ahead of prayers and hymns.

Private Chanara Smith-Rookes, who played piccolo in the Band & Corps of Drums, said: “It’s one of the most important events in the calendar that we have.”

She added: “We come here to celebrate all of those who have sacrificed before us, for us to be able to be here where we are now; for me to be in the Regiment.”

Pte Smith-Rookes, a 23-year-old from St George’s, who is a safety management system coordinator at Skyport, said she had a family history of band musicians.

She added: “What keeps me here is the camaraderie and it also keeps the music alive because otherwise there’s not a space for you to play music.

Corporal Orville Hall, 37, who was among six RBR soldiers attached to the Royal Gibraltar Regiment earlier this year to guard Royal sites in London, is a drummer in the band.

He said Remembrance Day was “very important, considering those who have served, have paved the way so that we can enjoy the freedom”.

Cpl Hall, a chef in civilian life and from Devonshire, added: “To think that they sacrificed it all, it’s definitely an honour to pay my respects and to remember.

“I hope somebody, some day, is going to remember my contribution.”

Colour Sergeant Runekco Edwards, 40, a works engineer from Paget and gun commander at today’s event, said he was “very proud” to be involved “because our ancestors fought for this”.

Lance Corporal Diaz Steede, 17, has been among the Regiment’s Junior Leaders for about two years.

The Berkeley Institute student said the group was well-rehearsed for being on parade.

He added that the Regiment was “fun”.

LCpl Steede said said: “We get to meet new people.”

Peter Aldrich, president of the Royal Bermuda Regiment Association, which was set up to promote and maintain the tradition and wellbeing of the Regiment and its predecessors, said it was the first time the organisation was able to be on parade for Remembrance Day.

He added: “I think it’s very important to support the Regiment and the war veterans.

“It’s also very important that we don’t let this event fade into history, it’s very important we support it and honour the sacrifices made for people, for our freedom.”

Mr Aldrich said: “For the association it’s very good to get all our members together so we can experience the camaraderie, which we all enjoyed so much in service.”

Isobel Flood, 97, who served with the Royal Canadian Air Force during the Second World War, described the event as “wonderful” and added: “It’s absolutely unbelievable that some of us can still walk.”

She said: “It’s nice to know that the younger ones are taking interest.”

He said: “It’s important to remember that if it wasn’t for these few people we wouldn’t have the freedom of walking up Front Street.”

Premier David Burt said it was the first time his children Nia, 7, and Ed, 6, were able to attend the Remembrance Day events.

He added: “It was just really great to see everyone back out.”

Corporal Dante Durham, 27, from Smith’s, was part of the catafalque party – a four-strong guard around the Cenotaph.

He said that the sun “always comes out at the right time, because we are able to show off our uniforms and show how shiny they look”.

Cpl Durham explained that the soldiers are trained not to peak in rehearsals, and instead save their best performance for the day of the event.

He added: “It was good to see the soldiers on parade for, I think, one of the most significant parades that we have on our calendar.

“It’s nice to see the community back out to support it.

“It goes to show how much we appreciate the sacrifice that many others have done in the past for us.”

Maj Ratteray said: “I think for the soldiers it’s extremely fulfilling to be out on parade, to have your family by and the community by, supporting you.

“I think that’s where the fun is.

“I think that’s the piece that’s probably the most rewarding.”

Private Ronesha James-Dill, a warehouse assistant from Pembroke, told how she tried to get involved in “every parade that we possibly have”.

She added: “It was a great parade.”