In 2017, the Royal Bermuda Regiment (RBR) is gave up its annual overseas training exercise and remainied in Bermuda to support the Government’s commitment to host the 35th America’s Cup.  This was be the longest sustained operation the Regiment has undertaken.  During this period, soldiers worked for one of three two-week periods during May and June.   The Regiment  provided direct support to the Event Authority, ACBDA, and to the Bermuda Police Service.

The Regiment held responsibility to the Event Authority and ACBDA for the following:

Joint Agency Control Centre (JACC).  The RBR provided a senior commander and clerk to the JACC, the main command centre for AC35, during event days.  Learn more about the JACC here.

Personnel Screening in the Event Village.  Every day that the Event Village (EV) was open to the public, the RBR conducted screening of all members of the public.   In total, there were 29 soldiers working on daily details for patron screening at the three entry points.  Learn more here about the event and here about our preparations for the event.

Vehicle Accreditation into Dockyard.  Based on Malabar Road during the hours of racing, soldiers were responsible for granting access into Dockyard for accredited vehicles.

Vehicle Screening into EV.  Outside of the times when the EV was open to the public, commercial vehicles were allowed entry into Cross Island via Freeport Drive.  The RBR controled access and searched / screened as the threat dictated.

Support to Maritime Ops.  The Boat Troop backfilled BPS Marine Section manpower from 1 May – 27 Jun.  Generally, they providinged 3 – 4 soldiers on each of the four daily shifts.  Learn more about our marine operations here.

Support to Police Support Unit (PSU).  The RBR’s Operational Support Unit (OSU) backfilled the BPS PSU manpower during the AC window.  Similar to Boats, they were placed on one of four shifts working in partnership with their police colleagues. 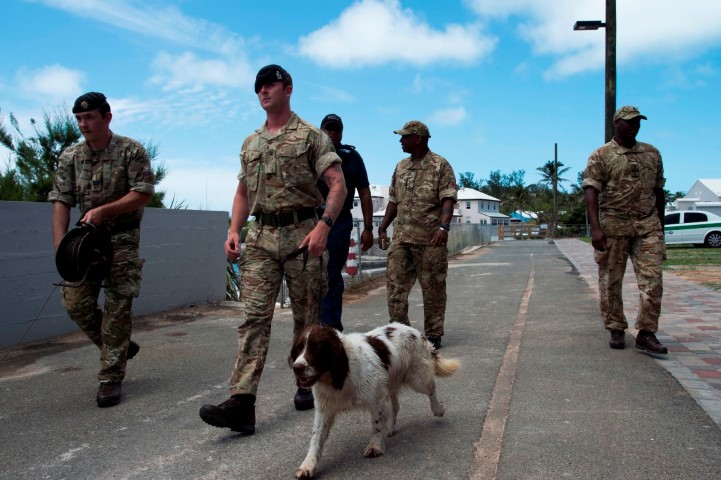 Accommodation for AC35.  The Regiment proved accomodation to various groups during AC35 including Red Bull Youth America's Cup Teams as well as other services.