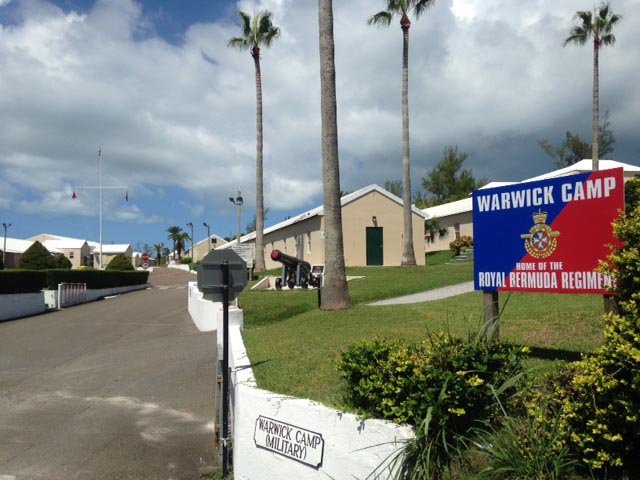 Warwick camp has been the home of the Royal Bermuda Regiment since shortly after its founding in 1965.  Currently nine and a half acres, the camp was built in 1869 by the War Office and included the lands of the South Shore Park, Turtle Hill and included an 800m rifle range.  Today Warwick Camp can sleep 298 people across eight barrack blocks the Officers’ Mess and Warrant Officers’ and Sergeants’ Mess.  There are four class rooms, an Operations Room, Regimental Headquarters, Guard Room, Company Offices and stores for equipment and clothing.  There is a 25m Barrack Range and an obstacle course.  The Dining Hall can seat 250 people.

Weapons
The Royal Bermuda Regiment is a military unit and as such we use various weapons for various tasks.  All soldiers that handle any weapons no matter their rank are required to pass annual safety and capability tests: Weapons Handling Tests (WHT) & Annual Personal Weapons Test (APWT).  They are also required to pass a Rules of Engagement (ROE) assessment.  These tests ensure that soldiers are current in their abilities and that safe practices are being followed.

Vehicles
The Royal Bermuda Regiment holds a variety of vehicles to serve its needs.  The vehicles are managed and serviced by the Motor Transport Section of Quartermasters Company.

Boats
The Regiment holds a selection of boats operated by the Boat Troop in A Company.  The Boat Troop supports training and operations, including range safety, oil booming, EMO operations, and joint patrolling with the Bermuda Police Service during peak periods.