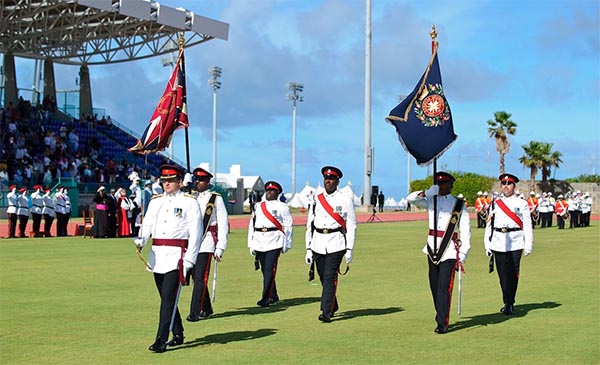 Men in all ages have made for themselves signs and emblems of their allegiance to their rulers, clans and brotherhoods. With these emblems at the fore they were duty bound to uphold those laws, principles and traditions of the institutions with which they were affiliated. Prior to modern communication, Colours served as the rallying point for Regiments on the battlefield and were fiercely guarded in battle. Following in this ancient and honoured custom, the Regiment has our Colours as a symbol of our duty towards our Country and Regiment. The Colours represent our resolve to guard, preserve and sustain the great traditions of bravery, service and self-sacrifice of which we are the proud inheritors.

The Queen’s Colour is the senior colour and carried on the right. It is a Union flag with the monarch’s crown and the words Bermuda Regiment, representing our allegiance to the crown. The Regimental Colour is carried on the left. It has a motif similar to the Regimental Badge, although crossed gun barrels appear under the Maltese Cross rather than the single barrel and wheel seen on the badge. These symbols are surrounded by a garland of roses and thistles.

Our first Colours were presented to the Bermuda Regiment on 24 November 1965 by our then Colonel-in-Chief, HRH Princess Margaret She returned to present a second set of Colours in 1990 on the occasion of the Regiment’s 25th Anniversary. The current set of Colours were presented in November of 2010 by our current Colonel-in-Chief HRH Duchess of Gloucester at the National Stadium.

The Bermuda Regiment also has the distinction of having two ceremonial 25 pounder guns that date from the Second World War, which are now used solely for saluting purposes.  As artillery regiments do not have Colours per say, the guns are afforded the same distinction and respect as the Colours.

The Regimental Badge is instantly recognizable by all within the Regiment and former members and overseas personnel. It is as much a source of identification to others as it is a symbol of pride. This insignia is worn on headdress, appears on the unit flash and is incorporated into signage and all printed materials.

The badge combines a field gun of the Artillery with a Maltese Cross set inside the over-large wheel, with a half wreath under and a half-banner above carrying the word 'Bermuda', surmounted by a crown. The Maltese Cross was the central component of the BVRC badge and the artillery piece is a component of the BMA. In addition, the ceremonial and other uniforms you wear have many blended elements of the former units.

The Bermuda Regiment March is a stirring quick march heard when The Colours are marched on and off parade and when troops are marching past. The march was written in 1965 by then Director of Music Major LN Dunn, MBE, ED, ARCM. Lyrics were added by Maj B StV Dill, ED, EM, AVCM as follows:

Here’s To Us The Soldiers Of The Land, Our Land,
Honour Bound, Brave And Sure, We’re Proud From Man To Man,
Bermuda Is The Home Of Regimental Pride,
And To Our Flag We’ll Ever Be True.

For We Will Not Be Moved Away,
From Our Task, From Our Goals,
To Conquer All Our Foes,
For We Will All Unite,
To Preserve And Lead The Glorious Fight.

For We Will Not Be Swayed Away,
From Our Task, From Our Goals,
To Conquer All Our Foes,
For We Will All Unite,
To Preserve And Win The Glorious Fight.