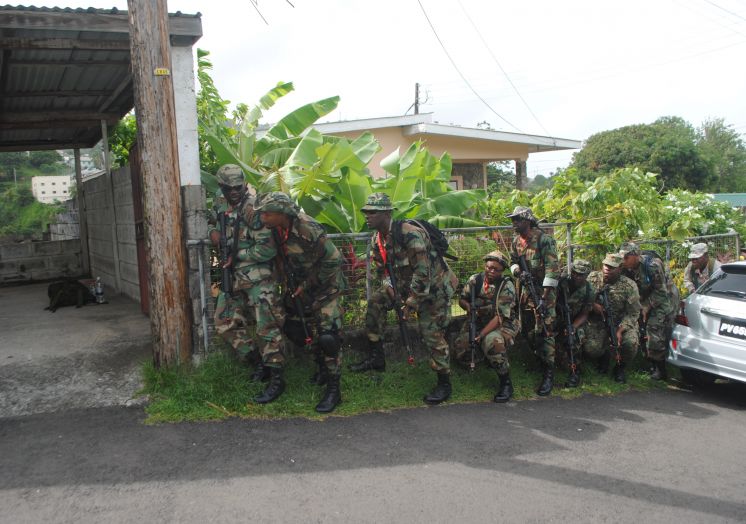 Bermudian soldiers today (JUN 17) played a vital part in an exercise in the Caribbean that saw an international assault team take down a bomb making factory based in a house.

Royal Bermuda Regiment troops carried out reconnaissance and intelligence gathering outside the building near the Old Montrose police station outside the St Vincent & the Grenadines capital of Kingstown.

Lieutenant Commander David Shamsudeen of the Guyanese Coast Guard, part of the Regional Observer Assessment Team, said afterwards that the Bermuda troops, who were in hiding around the building, had performed well and the assault was successful.

‘He added: “They had good coordination and communication. There were some mistakes, but nothing that would have affected the success of the operation.

“Once they got into the building, they split up and searched the rooms at the same time, which was good.”

The assault was part of Exercise Tradewinds, a regional disaster relief and security training exercise organized by the US military’s Southern Command.

About 120 troops from the RBR are involved in the exercise.

RBR Private Brent Smith, who acted as the communications specialist for the assault team, said: “I enjoyed it. It was a great learning experience. We’ve got people from all over the world working really well together.”

The assault team stormed the house, ‘killing’ several gunmen and ‘arresting’ other members of the bomb making cell, who were played by Royal St Vincent & the Grenadines Police Force officers, using vital information provided by the hidden RBR reconnaissance squad.

RBR Sergeant Tashon DeSilva, who led the reconnaissance team, said: “Our role was to assess the enemy strength, capabilities and disposition.

“The recce team went in and did its job. The difficult thing with reconnaissance is you don’t always know what you’re looking for and sometimes you have to wait for hours before you get what you need, which is what happened here.”

But Sergeant DeSilva added: “That two-minute window you do get can be the difference between a successful operation and an unsuccessful one.”

He said the RBR had learned a lot from their work with the RSVG police.

Sgt DeSilva added: “They have a superb relationship with the public and advanced policing skills, as well as great search and strike capabilities.”