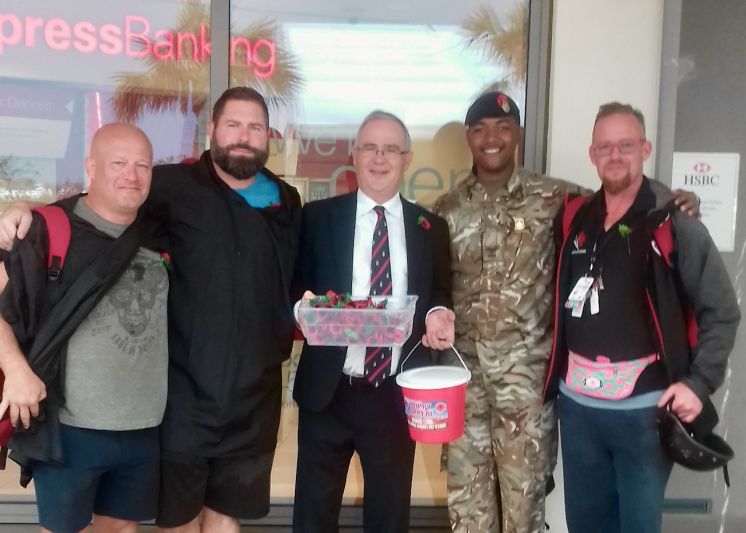 Governor John Rankin and Cpl Dante Durham sell poppies to members of the Canadian team in Bermuda for the World Rugby Classic. (Photograph by RBR)

Governor John Rankin and members of the Royal Bermuda Regiment hit the streets of Hamilton this week to drum up donations for the annual Poppy Appeal for veterans and their families.

The Governor said: “I’m always glad to support the appeal, firstly because it’s the right thing to do to help our veterans, people from Bermuda who served in war and more than done their duty.

“It’s also an important day for me as my late father served in the Second World War and I wear a poppy in memory of him.”

Mr Rankin was speaking on Tuesday as volunteers, civilian and RBR, sold poppies around the city, despite occasional heavy rain.

He said: “I thank everyone who supports veterans on poppy day.”

Mr Rankin added: “Given how bad the weather is, I have been doing a brisk trade – people are generous.

“When people see the poppy, they know what it represents and they support it every year.”

Cpl Durham, the fourth generation of his family to serve in the Regiment or a predecessor,  said: “I’m pleased to be out here doing this with the Governor.

He added: “It’s part of my contribution as a Regiment soldier, as well as giving thanks to those who fought in the World Wars for Bermuda.”

Cpl Durham added he had marched in the November 11 Remembrance Day parade six times, but had never sold poppies before.

He said: “To be doing this with the Governor, the Commander-in-Chief of the RBR, is very rewarding.”

Poppies will remain on sale until next Monday.