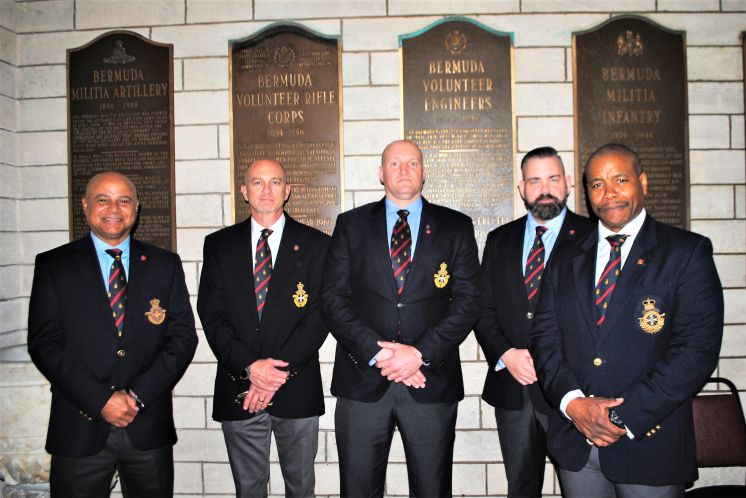 An association set up to promote the welfare of serving and former Royal Bermuda Regiment soldiers has launched a scholarship fund, it was announced today (MON).

Major Preston Gill, a serving RBR officer and president of the Royal Bermuda Regiment Association (RBRA), said an initial $2000 had been allocated for a Bermuda College bursary programme available to soldiers past and present.

Maj. Gill added: “This is to test the process and we hope to increase the amount of money available for this as we progress. If there are any businesses or individuals out there who would like to help us create a larger fund, we would be happy to talk to them.”

The RBRA was founded last year to promote the welfare and traditions of the RBR and its predecessor units and to continue the camaraderie forged by members and former members of the Regiment.

It is not an official part of the RBR, but was formed with the approval of senior officers and the Defence Board.

Maj. Gill said: “Scholarships are just one way we want to enhance the experience of service in the RBR.”

“We’re also looking to help create a welfare fund and are interested in donations for that, which the association will run with the Bermuda Regiment Charitable Trust.”

Maj. Gill added that it was also hoped to expand an existing RBR discount scheme backed by many retailers and service providers to enhance service in the Regiment even more.

He said: “Service in the RBR, which is recruiting at the moment, brings many benefits – discipline, the opportunity to travel, good rates of pay and the personal growth that comes from being tested to the limit – something that makes job applicants who have served attractive to potential employers.”

The RBRA teamed up with the Phoenix pharmacy group at Easter and the firm donated 200 Easter eggs as a morale booster to soldiers on Covid-19 security duties at the height of the pandemic lockdown.

It also recruited cell phone companies Digicel and One Communications, who gave credits to soldiers embodied for the crisis worth a total of $30,000.

Fuel firm Rubis also gave 200 $20 fuel cards to embodied soldiers and other businesses, like wholesalers Butterfield & Vallis, stepped up to deliver food and refreshments to the troops.

Maj. Gill said: “The RBR became, for many soldiers, their only employment because they were laid off from their civilian jobs because of the Covid-19 crisis and we hope that employers will bear that in mind when businesses start to hire people again.

“The professionalism and can-do attitude fostered by service in the RBR is easily transferrable to civilian life and is an asset to any employer.”

RBR Commanding Officer Lieutenant Colonel Ben Beasley said: “I offer my personal thanks to the members and trustees of the RBRA.

“The implementation of this organisation has been long talked about – they have helped to animate our history and underscore a bright future for the Regiment.”

To join the association or to help with the bursary programme, welfare fund or discount scheme, email This email address is being protected from spambots. You need JavaScript enabled to view it. or phone  535-5858.