Bermuda’s Military History
The Royal Bermuda Regiment has a proud history of service at home and overseas, building on the distinguished service of its predecessor units.  Bermuda’s military history is a glorious story that is not often told.

The Early Years
While local militias were raised from time to time since colonization in 1612, an Act of Parliament in 1895 formally raised official units to supplement the British Army garrison on the island.  Given segregationist policy of the day, two units were formed: the black-recruited Bermuda Militia Artillery (BMA) and the Bermuda Volunteer Rifles Corps (BVRC), later the Bermuda Rifles, which was white.  Other units were raised at various times, including the Bermuda Militia Infantry (BMI), Bermuda Home Guard, and Bermuda Volunteer Engineers (BVE).

Contingents of BMA and BVRC served in France during the Great War and suffered considerable casualties.  The BMA served in the Royal Garrison Artillery and the BVRC served in the 1st Battalion Lincolnshire Regiment.  The European campaign saw 80 Bermudians lose their lives, while another ten died on home duty.  Many were conspicuous in their service, with Bermuda’s soldiers earning, amongst other commendations, the Military Medal for Gallantry.

In the Great War, two volunteer contingents from the BMA, totaling 250 all ranks, served in France and Belgium. The BVRC also sent two volunteer contingents to serve with the Lincolnshire Regiment. The first arrived in France in June 1915 and was the first Colonial Force to serve in the trenches of the Western Front. Of the men who served with the Lincolns, 16 gained commissions, one received an OBE, and six the Military Medal. In 1929 His Majesty, King George V formally approved the affiliation of the BVRC with the Lincolnshire Regiment, this being the origin of the current link of the Royal Bermuda Regiment to the Royal Anglian Regiment.

During the Second World War, in 1944, five offices and 100 other ranks of the BMA formed the Bermuda Contingent of the 1st Caribbean Regiment, which served in Europe and North Africa.  At home, the BMA manned the St. David’s Battery and later Warwick Camp, until they were demobilized in 1946. 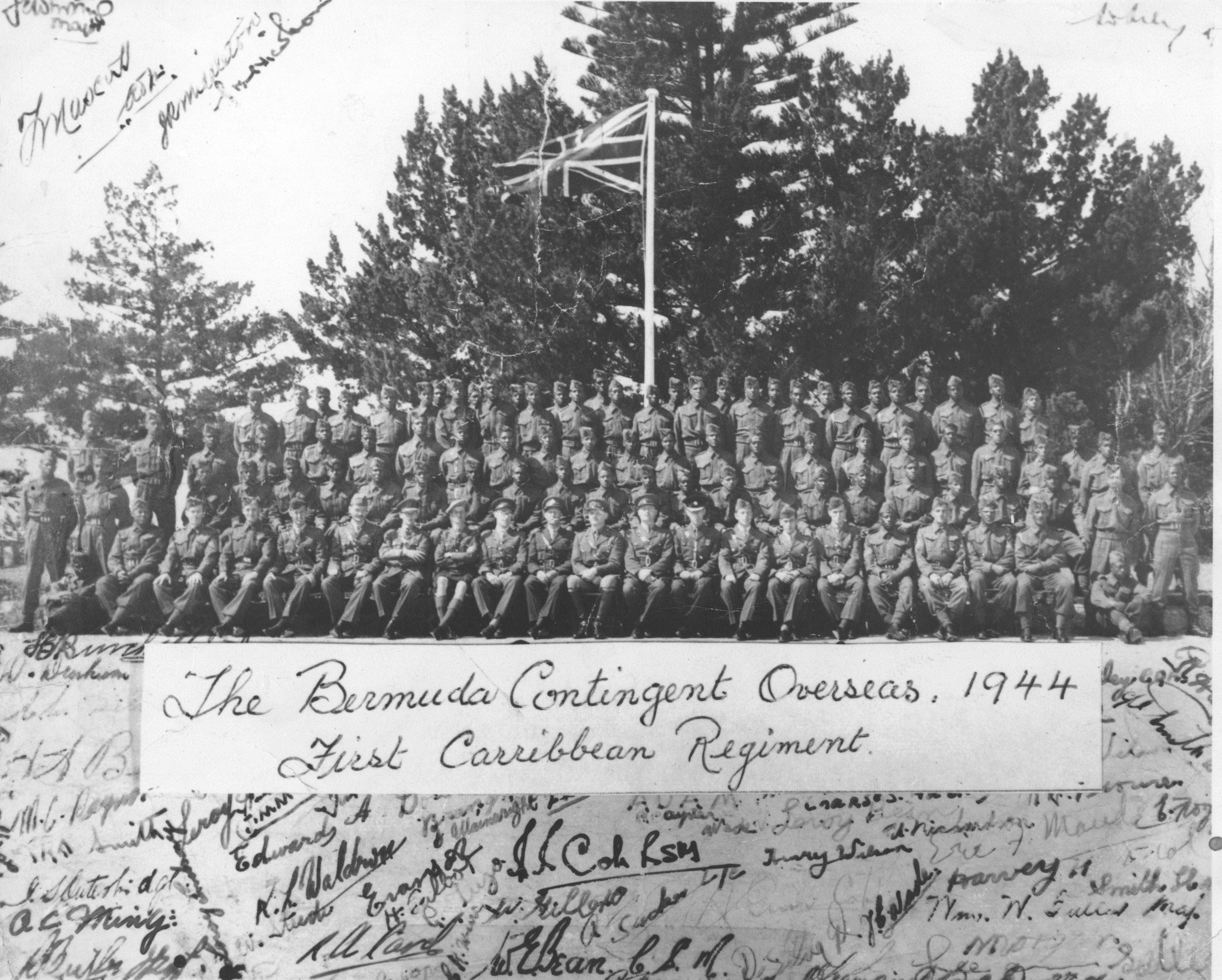 The BVRC served as a company in the Lincolnshire Regiment.  Two contingents totaling 100 all ranks served with the Lincolns, including in North West Europe and Burma. The BVRC was substantially demobilized in 1946.

Other Bermudians joined the Royal Air Force and Royal Canadian Air Force or saw service with the Royal Navy.  Of the many Bermudians serving overseas, 35 made the ultimate sacrifice.  Many were highly decorated for their valour, including a George Cross.

At home, the BMI and BVE, along with those who remained of the BVRC and BMA, guarded our shores.  Bermuda’s brave men and women served with courage, pride and distinction during these wars.  It is fitting that we remember them every 11th November during the National Service of Remembrance.

Post War Years
Post World War II Bermuda was full of military activity with the continuing garrisons, the active HM Dockyard under the Royal Navy and the well-established bases of the American and later Canadian Forces.  The advent of the so-called Cold War had changed the face of the world, including Bermuda and in 1951, under the Defence Local Forces Act 1949, both units were re-formed under the central command of Headquarters Local Forces. The BMA retained its original name but the BVRC was succeeded by the Bermuda Rifles. Both units retained their separate identities and their own Bands.  The gun defences of Bermuda were becoming as outdated and in 1953, the BMA were re-equipped and trained as infantry, although they proudly retained their Royal Artillery allegiance, uniform and badge.  Conscription was introduced for the Bermuda Rifles in 1957 and for the Bermuda Militia Artillery in 1960. Along with the social changes of the 1950s and 1960s, the two units were poised for change.

Amalgamation
The BMA and Bermuda Rifles, while officially separate and still segregated by colour, steadily became jointly active through training exercises and ceremonial parades.  On the 1st September 1965, they were combined to form the Bermuda Regiment.  The amalgamated infantry battalion adopted the histories and characteristics of the predecessor units, although disappointingly the units’ well-earned battle honours were not carried forward to the Colours and Drums of the Regiment.  Her Late Royal Highness, The Princess Margaret, GCVO, Countess of Snowdon, was the Regiment’s first Colonel-in-Chief and presented the Regmient with its first Colours.

1960s and 1970s
Since 1965. the Royal Bermuda Regiment has been embodied on average every other year, including in 1966 when it had to deal with the BELCO riots that left several policemen seriously injured. Civil disturbances in 1968 and 1977 led to the Governor of Bermuda to order the embodiment of the Regiment to support the Police Service. The Gilbert Report of 1978 led to the expansion of the Regiment to 711 all ranks.

1980s
The strength and role of the Regiment was reviewed following the disturbances of 1977 and the Gilbert Report led to significant expansion of the Regiment in terms of structure and training.  The 1980s presented further social change as the Regiment slowly defined its role within society.  From the General Strike of 1981 through to the devastating Hurricane Emily in 1987, the Regiment showed itself to be responsive in time of national crisis.  Regional deployments followed to Montserrat in 1986, Jamaica in 1988 and the British Virgin Islands in 1989. In 1980, the first black Commanding Officer, Lt. Col. C. Eugene Raynor (now Honorary Colonel of the Regiment) was appointed.

1990s
The Regiment entered that decade celebrating its 25th Anniversary.  During a Royal Visit, The Late Princess Margaret presented a new set of Colours to the Regiment.  The Regiment was twice embodied for security and ceremonial services for the Anglo-American Summits of the early 1990s between President Bush and Prime Ministers Thatcher and Major.   In 1993, the Defence Act 1965 was supplemented by Governor’s Orders, which further defined the structure and purpose of the Regiment.  In 1996, Bermuda became the focus of the world when a Chinese fishing vessel Xing Da with 100 illegal immigrants entered Bermuda waters.  The Regiment was embodied to provide cordon and search capabilities and humanitarian support.

2000s
The new millennium saw the Regiment branch out further into the international arena, expanding its training with its sister regiments and supporting countries in need. In 2000 the Regiment undertook joint patrols with the Bermuda Police Service for the Tall Ships 2000 event.  2001 saw the Regiment embodied in response to the September 11 terrorist attack on the United States. In addition to continuing training opportunities throughout the Americas and Europe, Regiment personnel served in Africa as part of the International Military Advisory Team to Sierra Leone’s armed services. Between 2001 and 2005, six soldiers participated in 6-month tours in Sierra Leone joining IMATT.  In 2003 the Regiment was embodied for Hurricane FABIAN in September 2003 which was the most severe hurricane in living memory.  In October 2004 and March 2005 the Regiment deployed a highly successful contingent to the Cayman Islands and Grenada, following the devastation caused by Hurricane IVAN.  In 2005 the Bermuda Regiment was subject to another Review, which set an establishment of 612 all ranks.  In 2007 the Regiment again deployed a contingent of soldiers, this time to Barbados as part of a CARICOM force to provide security for the Cricket World Cup.  In 2008, a further contingent of soldiers was deployed to the Turks and Caicos Islands following Hurricane IKE. In 2009 to commemorate Bermuda’s 400th Anniversary Her Majesty The Queen visited the island and the Regiment provided guards and sentries during her visit. The Regiment also hosted a Military Tattoo which featured our Band and various bands from other militaries all over the world.

2010s
On 13 November 2010, our Colonel-in-Chief, Princess Birgitte (now HRH The Duchess of Gloucester) presented our current set of Colours at a parade at the National Stadium.

In 2014 the Regiment emerged from the latest security review with a strong endorsement, and was embodied for 10 days for the back-to-back hurricanes of FAY and GONZALO, providing over 2,140 man-days of hurricane and disaster relief, including coordinating the deployment of HMS ARGYLL for which the Regiment drew widespread acclaim and reconfirmed its valuable service in restoring the island to normalcy.

During its 50th Anniversary Year in 2015, the Regiment received the honour of a Royal title, and was awarded the Freedoms of Town of St George’s and the City Hamilton. It also Trooped the Colours and in October 2015 hosted HRH the Duchess of Gloucester at Warwick Camp and at the BR50 Tattoo. The latter attracting over 6,000 guests over 3 nights to see 400 performers from 11 local and international Bands. That same year the Royal Bermuda Regiment received new modern weapons, was embodied for Hurricane JOAQUIN, supported the Americas Cup World Series Sailing event in Hamilton, and began Special Constable Training for selected soldiers.

Today the Royal Bermuda Regiment is 340-strong and entirely made up of volunteers. All serve for a minimum of 3 years 2 months, but many extend their service thereafter.  Since 2016, the Regiment has had volunteer-only recruit intakes.  A small cadre of full-time staff work daily providing essential administrative and training support for regimental personnel who train in the evenings and over weekends. The current full-time staff consists of 30 personnel, including several former British military personnel.