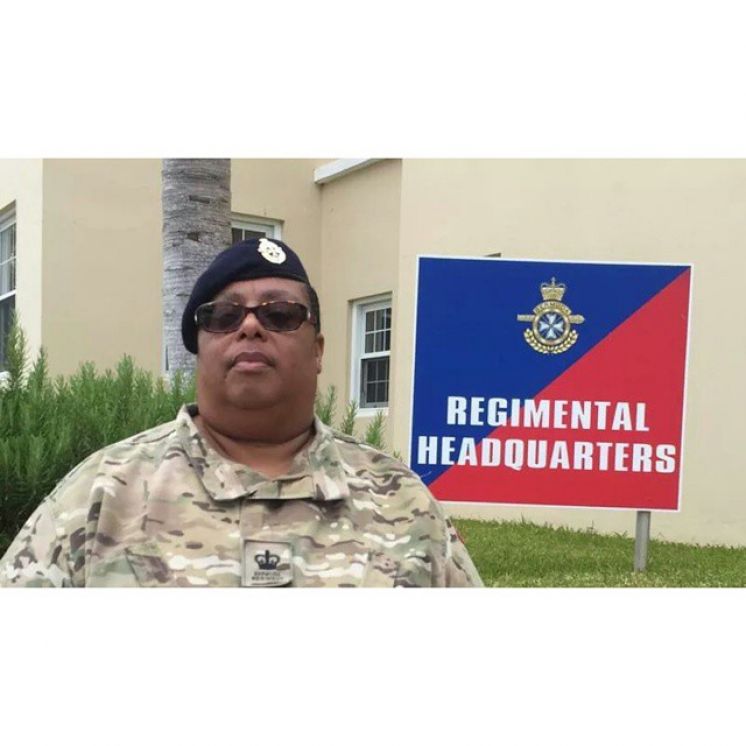 A female Royal Bermuda Regiment soldier who was one of the few who reached the senior Non-Commissioned Officer rank of Warrant Officer, has died.

Dorothy Nisbett, who was 61 and a mother of three, died suddenly at the weekend after a lifetime of service to the RBR and the country.

Major Warren Furbert, a retired Paymaster and RBR Second-in-Command, said he had worked closely with Mrs Nisbett, who was an administrative specialist and a member of the permanent staff at Warwick Camp for decades.

Maj. Furbert said: “I was shocked and surprised to find out she had passed. Her administration skills were first class.

“She did every role from Quartermaster’s clerk up and was Chief Clerk at one stage.

“She was one of those people, if you wanted to know about the Regiment processes and history, to go to.

“ I don’t know anyone who has had any significant service in the Regiment who did not have interaction with here.”

Mrs Nisbett, who was awarded the Efficiency Medal in 1995, joined the then-Bermuda Regiment in 1983 and became a full-time soldier in the middle of the decade.

She retired from her full-time post in the Quartermaster’s office in 2014, as a Warrant Officer Class 2, one of only two women to achieve the rank, but continued her links with Warwick Camp as a civilian employee of the Defence Department.

Major Kenneth Wainwright, the Regimental Administration Officer and Officer Commanding Logistics Company, said Mrs Nisbett worked for him in uniform in Logistics and as a civilian in the Defence Department.

Maj. Wainwright added: “She loved her family and she was the backbone of it. She was someone who loved to share her experience and knowledge.

“She helped to train dozens of Company Clerks and served the Regiment well and proudly for more than 30 years.  Everyone is having a difficult time with the sad news, but especially in the Administrative team as they were a small and close group.”

WO2 Dean Rubaine, currently attached to the Ministry of National Security, said: “She was a dedicated worker administratively, always behind the scenes.

“Often, she would be in the office when nobody else was in Warwick Camp. She always made sure everything was done and had the Standing Orders at her fingertips.

“She was also a dedicated mother and grandmother – and she enjoyed a good joke.”

He said: “She was part of the backbone of the Regiment. She hardly ever said ‘no’ if you had a request for her. She would say ‘let me see what I can do’ and she would get it done.”

WO2 Rubaine added that Mrs Nisbett suffered a back injury several years ago “but that never stopped her – she continued until she couldn’t do it any more”.

Mrs Nisbett is survived by husband Andre, who she met and married when they both served in the RBR, daughters Andrea and Danielle and son Andre.

Lieutenant Colonel Ben Beasley, the RBR’s Commanding Officer, said: “Throughout her decades of service, Mrs Nisbett was a loved fixture at Warwick Camp.

“She was a thoroughly reliable member of the Logistics team when in uniform, and carried her sense of purpose when she returned as a civilian in the Defence Department.

“The outpouring of sentiments from current and former soldiers at home and overseas is a touching tribute to a member of staff who has been an integral part of the Regiment's story.”

Col Beasley added: “Although all the soldiers are carrying their own grief, our priority is to support Andre and the rest of her family who have lost a wife, mother, and grandmother.

“She was a matriarch who simply cannot be replaced, and it is our duty to provide what comfort we can to ease their suffering.

“All of us look forward to a period when the shock has passed and we can reflect on times which were happier because she was part of them.”