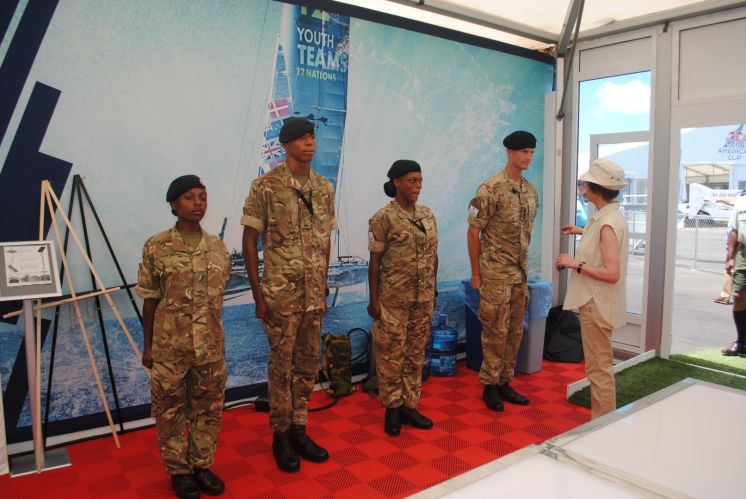 The Princess Royal yesterday met soldiers from the Royal Bermuda Regiment as she toured the America’s Cup village.  The Royal visit came as the RBR’s biggest-ever deployment drew to a close with the final races of the competition. 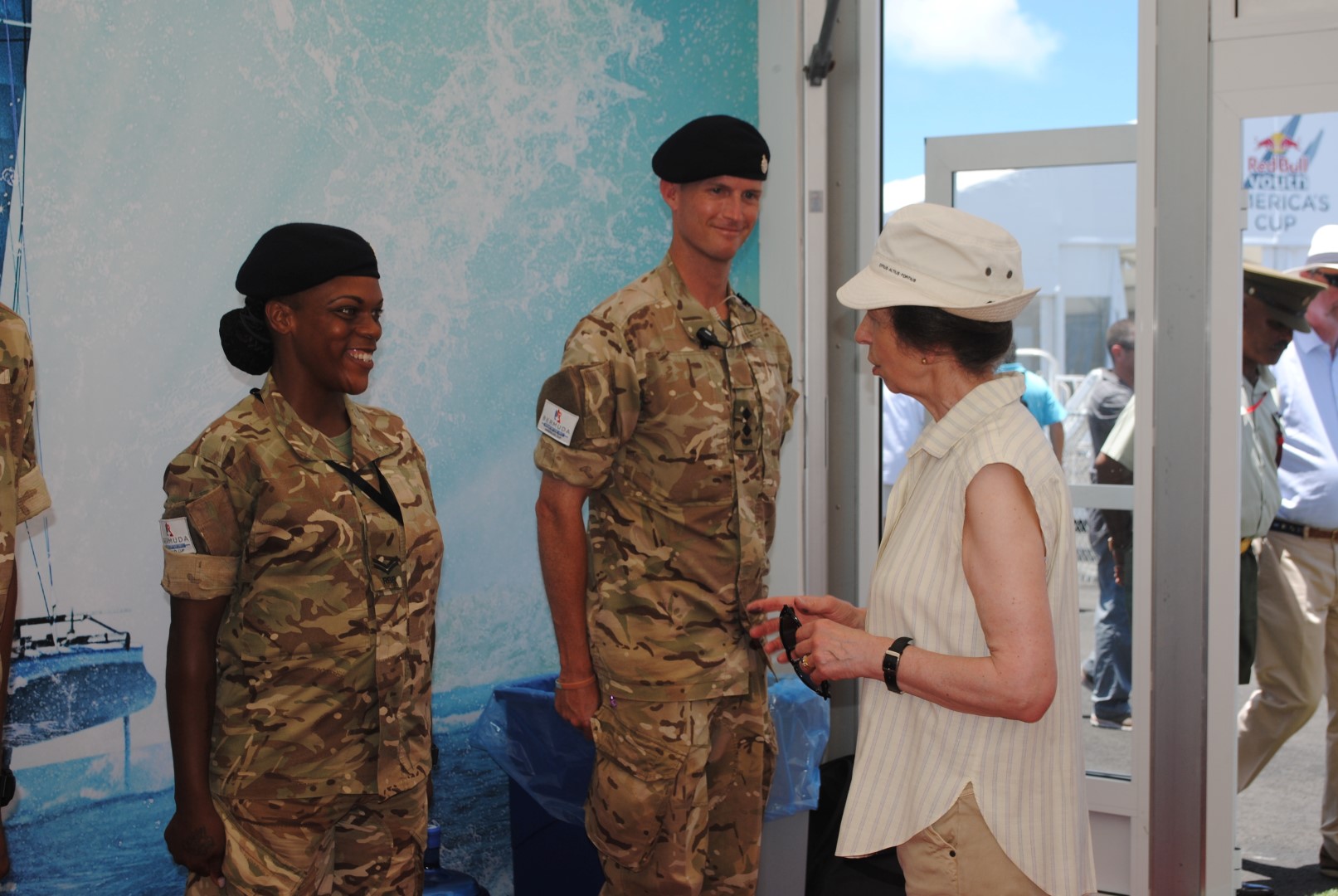 The Princess and husband Vice Admiral Sir Timothy Laurence met troops from the RBR security team, as well as British Army soldiers seconded for the event, police officers and other village volunteers.

Corporal Aisha Jordan, one of the soldiers who met the Princess, said: “She asked me what my task was – I told her it was working with the main security screening. I said I was really enjoying myself working here and she thanked me for my service.”

Cpl Jordan added: “She’s a very pleasant woman, very friendly. She was making me smile and I was trying to keep a straight face.”

Lt Emmerson said: “I told her I was in the process of finishing my two weeks on duty. It’s been a six week rotation and I said that I was very pleased to be here as security for the event.”

Pte Furqan added the Princess asked here where she and the other soldiers were sleeping while called up for America’s Cup duty. She was very pleasant.”

Pte Ebbin said: “She asked about what I was doing and my taskings and if I was enjoying it.”

The Princess met soldiers deployed on security duties the day after the RBR’s Operational Support Divers scoured the waters around the event village in advance of the Royal visit.

2nd Lieutenant Alex Gibbs, who carried out sub-sea checks with Sergeant Major James Self on Saturday, said divers had also been deployed as rescue swimmers throughout the event.

He added: “We’ve been working with the UK police assets doing clearance dives around the village, specifically on vulnerable points and in the vicinity of internationally important people and VIP guests.”

In addition, Sgt Maj. Self retrieved an earring lost overboard by a superyacht crew member, which was returned to her.

2nd Lt Gibbs said: “Between this and the rescue swimming, it’s been pretty full on for everyone. And all our guys are doing this on top of their full-time jobs with the Regiment.”

He added: “With these high profile events, what we do is extremely important. Our role is detection and deterrence and it’s good for the RBR to be in the public eye. And operational support diving adds a new dimension to what the Regiment can do.”

“Sgt Maj. Self said: “This was just one of several searches we’ve done throughout the America’s Cup. It’s important to be seen to be proactive and tie in with the site security plan.”

Lieutenant Colonel David Curley, Commanding Officer of the RBR, said: “The Princess Royal was very happy to meet the troops involved in the security operations.

“The event is almost over, but we’re still continuing to push the troops in all aspects to make sure we do our due diligence. We’ve had a lot of good reports about our conduct and performance on land and on sea.

“It’s been a great privilege and honour for us to have this major role and we want to finish on a very high mark and end the event with the same high standards we have shown throughout.”

He added: “The Regiment has really shone in dealing with large crowds, security screening and a lot of different types of security work and we will continue to build on that in the future for other events that may come to Bermuda or the Caribbean.”